The wait is over. Our advert has arrived!

A special mention goes to our production team for all the hard work they put into the video. All you existing and soon-to-become ParkJockey fans, sit back and enjoy “Hassle-free Parking”.

We are giving away 2 tickets to ‘The Commitments’ @ The Palace Theatre, West-End. The winner could be you, all you have to do is register or book with us from now until the 20th June 2014 to be entered into the competition. Good luck! 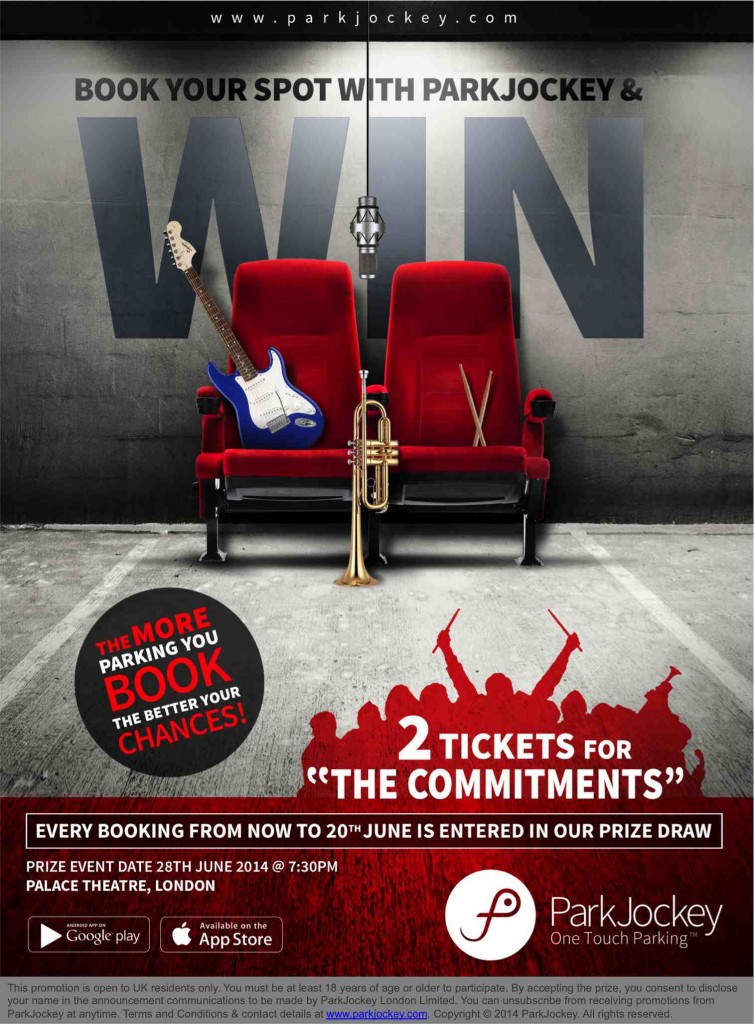 This morning was a momentous occasion:  ParkJockey was exposed to millions on live TV!

Not only have we accumulated 1000’s of social media mentions but also we got picked up in the top tech blogs such as The Next Web and IT Pro Portal, and not to mention our prime time breakfast slot on the one of the worlds top news channels – CNBC!

Our CEO Umut Tekin was asked to be featured on the CNBC morning show Worldwide Exchange, interviewed by Ross Westgate. ParkJockey’s app demo video was shown in the background presenting the seamless and ease of booking that coveted parking space with our app.

So, dear reader, hereby we give you ParkJockey – the parking solution that ‘Helps You Find That Elusive Parking Spot’ in London, because as studies show ‘you don’t want to spend a year out of your life time searching for parking, or do you?’

We are proud to announce a partnership with one of the biggest names within the parking industry: Q-Park.

They host 16 locations in the vicinity of Central London and ParkJockey is excited to collaborate with Q-Park in order to revolutionise the way all drivers park!

T-minus 6 hours until the strike commences for the London Underground! It is expected to start around 9.00pm tonight – you have been warned!

One of the most advanced transportation networks in the world by which many Londoners strongly rely on to get to and from work, meet their loved ones or take their children to school will suffer from a planned tube strike tonight.

It is expected that thousands of people will be affected which can cause severe delays and confusion for all. You will see astonishing queues at the working stations, and there is no point even taking a bus, unless you enjoy being packed compactly like a sardine in brine!

At ParkJockey we strive to make your life easier, and not (tube) strike to make it harder! We don’t want you to worry one bit if you decide to drive in. Avoid  getting caught up in the manic tube race and win the space race – Get 10% discount off your daily parking with ParkJockey using the promo-code: STRIKE10 at the checkout!

The time has finally arrived! After the initial launch of ParkJockey London where the team worked endless hours to get the show on the road, we proud to announce that we have now become an official member of the British Parking Association (BPA).

The 720 members of the BPA embrace manufacturers, car park operators, local authorities, health authorities, airports, railways, shopping centres, bailiffs and consultants – to that we can now add Mobile App Technology to the list – with ParkJockey becoming one of the first!

So what does becoming a member of the BPA mean? It is denoted that the BPA are the largest professional association in Europe and the recognised authority on parking. Their main aim is to represent and promote the best interests of the parking profession, and also influence those who are involved within this growing industry. Therefore, it can only mean ParkJockey is soon to be the word on the lips of many drivers, especially as they tire endlessly searching for parking – ParkJockey is going to be their first option and revolutionise the way you park, complimenting our business innovation award.

Strive for greatness, this is only the beginning . . . Watch this space!

London at this time of the year is an exceptional place, with lots happening. And today brings us……International Pillow Fight Day! You heard me correctly, and say it slowly I-n-t-e-r-n-a-t-i-o-n-a-l Pillow Fight Day! It hits any special day out of the park!

For one day only, you have the freedom to take your spot centre stage in the heart of London, Trafalgar Square. Get your artillery by your side and release your working week stress, I quote “become a significant part of part of pop culture!” From London to Shanghai you can endure the satisfaction of throwing a pillow without a car in the world.

That’s what most people do when driving into Central London. So, if you are driving into Central London, firstly don’t get hit, and secondly, if you do get hit by traffic, especially when circling for parking, – fear not because ParkJockey will come to rescue! Book a parking space,  and don’t worry about the fluff, or feathers, I mean fuss because its guaranteed and no one else can take it from you!

This weekend, Britons will hopefully be waking up to some sun. I mean it is Spring after all?

More notably, children will be waking to quickly run down to the kitchen and bring their mothers a bowl of granola and a nice cup of tea, to mark the occasion of Mother’s Day, traditionally known as “Mothering Sunday.”

Mothers are our most precious belongings!

Mothers are our most precious belongings! Mother’s Day in the UK is celebrated nationwide to honour what mothers do for us… Now at ParkJockey we want to honour and make sure your celebrations are as seamless as possible… So we offer you 10% discount in your parking in London this Sunday. USE PROMO CODE “MOTHERS” to claim your discount at any affiliated location in the city.

Quite a lot of you will be venturing into Central London for a nice meal, or you may have tickets to some light entertainment in the West End. Don’t be scared to drive in because at ParkJockey we will take care of that for you and ensure Mother’s Day doesn’t leave you searching for that  parking spot and ruin a special day for a very special person in your life!

Today was an extremely exciting day! Not only was the sun out in London but at a high-profile event held in the heart of the London TechHub, Mayor Boris Johnson unveiled his until now secretly-kept plans for the first ever London Technology Week. The Mayor was optimistic and confident that it will contend on a similar global scale to London Fashion Week, which was, of course, “music to the ears” of the London’s Tech City.

Our London Heads of Operations, Kamal Rajput and Stefan Friederichs, along with our Managing Partner attended the event. A host of leading figures in tech, such as Michael Acton Smith of MindCandy, Facebook VP-EMEA Nicola Mendelsohn and Oscar-winning CEO of Framestore, Sir William Sargent, were present.

The announcement has already stirred up interest in the press and reflects the Mayor’s ambition to make London the “tech capital of the world.”

As importantly, Mr. Johnson welcomed three new firms to the capital, one of which is (drumroll)  –  PARKJOCKEY !!!

In an instant, we were tweeted about and also made it into the London Evening Standard, along with several blogs and London24. Channel 9 of Australia also interviewed our Heads of Operations for a quick ParkJockey demo. They seemed pretty impressed!