As the physical and virtual worlds transform into every color of the rainbow, ParkJockey invites all LGBTQ individuals and supporters to #ParkwithPride for Pride Week 2015! We have teamed up with the “It Gets Better” Project, a non-profit organization whose mission is to communicate to LGBT youth around the world that it gets better, and to create and inspire the change needed to make it better for them. We encourage all NYC and Chicago Pride Week 2015 attendees to reserve their parking in advance in support of the “It Gets Better” project. For every parking reservation, $1 of the proceeds will be donated to the non-profit.

One of the most popular NYC parades of the year will paint Fifth Avenue in every color imaginable. For Pride Week 2015, more than 50 floats, 300 marching organizations and thousands of spectators will unify for a celebration of love, equality and PRIDE for one’s’ true color! This year’s grand marshals are actors Ian McKellen and Derek Jacobi, activist Kasha Jacqueline Nabagesera and artist-educator J. Christopher Neal. Check HERE  for a full list of New York Pride Week events. The march begins at Fifth Ave and 36th St and proceeds south to the reviewing stand at Fifth Ave and 8th St before turning west on Christopher St. to Greenwich Street.

To book your parking for the NYC Pride Week 2015 events, click HERE!

Chicago’s 2015 Pride Parade will highlight 200 registered performances including floats, decorated vehicles, dance groups, marching bands and walking contingents.The participants represent LGBTQ supporting community programs, clubs, businesses, governmental officials and individual community members. As the most historical Pride Week 2015, officials are estimating the crowd to be in the hundreds of thousands. So the plans are to line the parade route with barricades on both sides of the street from beginning to the end of the parade route. Spectators will be required to remain behind the barricades. Extra police officers and parade marshals will be stationed at various points on the street in front of the barricades along the parade route. The parade starts at noon on Sunday, June 28, 2015, at Montrose Avenue and Broadway in Uptown and ends near the intersection of Diversey Parkway and Sheridan Road in Lincoln Park.

To reserve your parking for the 2015 Chicago Pride Parade, click HERE!

The Pride Parade is a major event in Chicago. It started 43 years ago as an act of rebellion against harassment and discrimination. But today, it shows the unity of the LGBT citizens and enjoys support from the broader community. This year, there will be a lot more to celebrate; it is the first year where gay marriage has been legalized in Illinois and members of the U.S. Armed Forces can march openly with pride and without fear of being discharged.

The route of the parade will start at Montrose and Broadway, and end on Sheridan and Division going through Halsted and Belmont. If you are driving to the parade, finding parking is an obstacle. Fortunately, you are able to reserve your parking through ParkJockey  which provides different parking facilities near the Pride Parade within walking distance, including 808 W. Addison.

ParkJockey and its employees are proud supporters of the Pride Week and advocate equal right for all citizens regardless of sexual orientation. 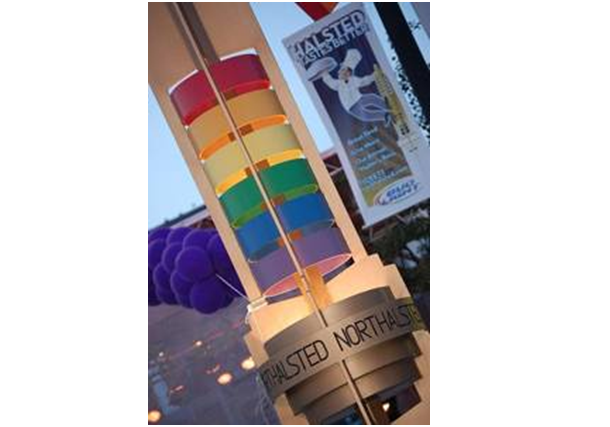